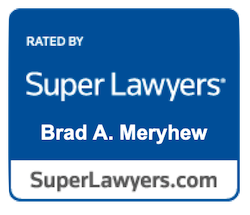 Brad Meryhew is a passionate and highly regarded advocate for individuals accused in state and federal courts in Washington of any form of sexual misconduct. Brad’s track record of success at jury trials, negotiations, and in getting cases dismissed has earned him a reputation as a leading trial attorney in his very challenging practice area. More than that, he has been a leader in improving the sex offender management system statewide through his advocacy for changes in public policy over the last fifteen years.

Brad has represented the Washington Association of Criminal Defense Lawyers and the Washington Defender Association on the Washington Sex Offender Policy Board since its creation in 2008. Brad has served for the last three years as the Chair of the Sex Offender Policy Board and is the only member to have been on the Board since 2008. This Board was created by the Washington Legislature with the responsibility to review and apply the emerging research and best practice policy analysis related to the management of sex offenders, and to make “evidence based” recommendations to the Legislature in regard to sex offender policy. Recent projects include reforms to the procedure for releasing Sexually Violent Predators, juvenile sex offender registration, lifetime supervison for certain individuals convicted of sexual offenses, and treatment alternatives to prison for certain sex offenses. The projects and successes of the Sex Offender Policy Board are summarized in this document. Brad regularly testifies before the Washington Legislature and is actively engaged in negotiating and lobbying for Legislative action to achieve sound and reasonable policies regarding sex offenders.

Brad has handled many high profile cases over the years and is experienced in media relations and protecting his client's rights and reputation in those cases. Brad has represented teachers, coaches, school bus drivers, daycare operators, group home counselors and clients whose cases have gotten a great deal of public attention.

Defending those accused of sex offenses requires a great deal of knowledge and experience with complex issues, expert witnesses and a large body of research on the investigation of sexual assault allegations. Brad has taken the time to read the research and is familiar with the way these cases should be investigated and with how to attack the often-inadequate investigations that lead to charges being filed. Defending against false allegations, or mitigating the effects of true allegations, requires an attorney with experience, and an understanding of the research and literature in these areas. Brad brings that combination of experience, skills, and reputation to the table to ensure his clients get the best results possible.

Brad's work on public policy issues and in the courtroom has convinced him that the best lawyers are those who are always direct and honest with their clients, opposing counsel and the Court. Brad's philosophy is to play well with others, and if that doesn't work then politely fight them hard at trial. He believes very strongly in building professional relationships with his adversaries and the many people who work in the criminal justice system, and in treating them with the respect they deserve. In turn he works to insure he and his clients are also treated fairly and with respect. Brad's passion for his work and his clients, his common sense and his sense of humor leave a lasting impression on those who meet him.

In college Brad was a very successful intercollegiate debater, eventually placing in the top ten debaters in the nation in 1980. Brad graduated from the University of Puget Sound School of Law with honors in 1994, where he was on Law Review and active with the Student Bar Association. His legal career included several years as a public defender, where he gained extensive felony trial experience.

Prior to his legal career Brad enjoyed careers in both governmental affairs and business. He attended graduate school at the University of Maryland, College Park outside on Washington, D.C. studying political communications and teaching public speaking and communication theory at the University. He worked in Washington D.C. for political advocacy groups as a communications professional, including the Center for Environmental Education, the National Association of Manufacturers and Business Executives for National Security. After that he worked in the private sector as a small business consultant for a national consulting firm, then as a manager for a large national warehouse outlet before attending law school. This breadth of real world experience allows Brad to bring a broad perspective to his work in the law.

Brad Meryhew is a Seattle native who was raised in Tukwila, Washington. He resides in Seattle’s Central District in a home that allows him to indulge his passion for gardening and the great outdoors. He has traveled extensively all over the world, including recent trips to China, Tibet, Costa Rica, Croatia, France, Italy, Turkey, Greece, Spain, Morocco, Cambodia, and Vietnam.

American Professional Society on the Abuse of Children

Association for the Treatment & Prevention of Sexual Abusers

Washington Association for the Treatment & Prevention of Sexual Abusers

Contact Us
Practice Areas
Our Videos
Client Reviews
★★★★★
Just so you all know this man is a GOD sent and has my complete blessing and gratitude. [Brad] is one of the most honest and forthright human beings that I have ever met...and he saved my life. Daniel
View More
Submit a Law Firm Client Review